But this is exciting, as its going go be my first video post!

Los Cabos.......... in spanish means "the capes" all i know for sure is its the end of the baja, and the name of the airport you fly into when you fly to the tip of the baja penninsula. Most Americans think of Cabo San Lucas when they hear Cabo the think of Cabo San Lucas.
actually the larger town is nearby San Jose del Cabo about 20 miles east of "Cabo". It was Here that the fishing hermit came to test his montana trout fishing skills against fish that would eat the biggest trout for lunch and look for more!

So i made a reservation on frontier airlines, spent the extra 100 bucks to not have a 5 hour layover in Mexico City and went to visit my Montana fishing partner Jim who has a boat in the San Jose Del Cabo marina, and has a captain, Pedro who has been fishing these waters since he was a "niño pequeño".

Jim has a condo in La Paz, but prefers to fish in Cabo because this is where the "big" fish generally hang out!
So arrive at Glacier Intl Airport at the butt-crack of dawn, ready for my flight to los cabos, a quick stop in Denver and im heading for the baja.  The stewardess passes out imigration cards and i start to fill it out......
pretty east stuff- nombre? got it, do i have any biologiecal cultures? nope.am i briinging more than 10 grand? please! address of where you are staying in Mexico? hmmmm thats a good question.... (Jim rented a house in san jose del cabo and said come on down!) so I dont know the address.


"please raise your seat backs and prepare for landing........... we're on the ground! now to find the address of where we are staying.......... phone dead! oh shit! am i gonna have to live in the airport like Tom Hanks?
how is Jim going to find me? visions of wandering around the baja looking for a big ole white truck with Montana plates that say "Pelagic".......

Ok so how do you say "im staying with my friend, he rented a house" in spanish? hmmmmmmm Next the lady says. i walk up,
she looks at my form.......... where are u staying? wow good ole english! um....... with a friend? ok put ur phone number down...... wow that worked out. now to find jim.............
I saunter through out of the airport look at a few signs people are clutching with names of thier guests on them on the off chance one says "Clay", wouldnt that be easy!
then i hear my name over the din of the noise........ I look over and sitting at the outside bar is jim holding out a cold cerveza. "u want a beer?", he says. ok! im in. next thing i know we are cruising through the baja looking like a lush jungle. 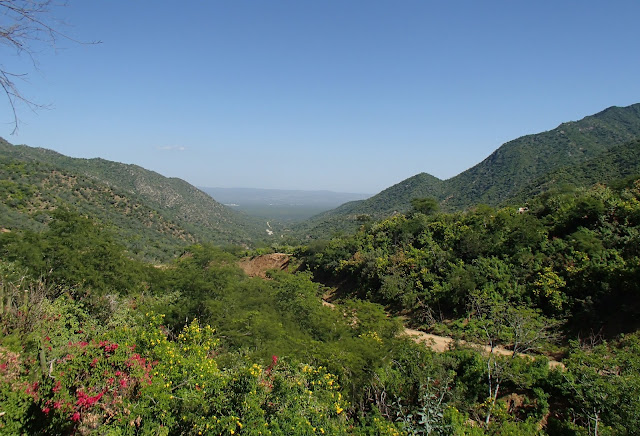 wow! i say its so much greener than ive ever seen! thats what 25 inches of rain will do Jim says.
(tropical storm dumped up to 28 inches of rain in parts of the baja, and the aftermath was still very apperent 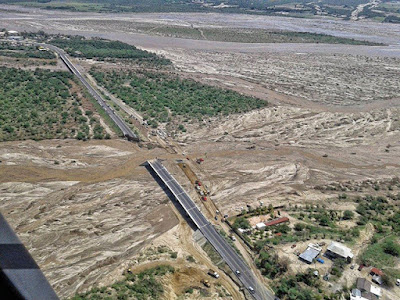 .The result however was spectacular, as the desert flora had been waiting perhaps years for a rainfall, and it was all taking advantage,
flowers, vines, and green was everywhere! 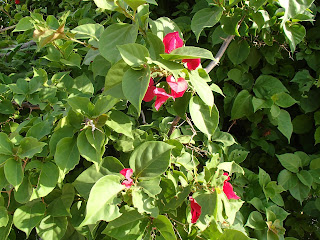 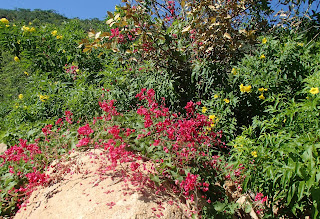 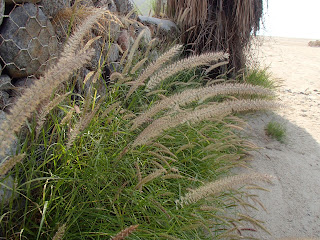 Jims father Vic and his friend Tom were to join  us a few days later....... so back to the airport. Got em then back to the house Jim and Debbie had rented. it was beauiful tile floors, pool, in a gated community, decorated like period movie from the renesceince.
Almost all the pictures were of nude women but none of their faces were visible........... hmmmmmmm and there was a dining room table big enough for all the knights and squires to dine!

Fishing was for yellowfin tuna (which jim calls "pollo", get it?) dorado, wahoo, and marlin. In the Baja, the land may seem dry and desolate, but the waters around Cabo are rich and full of diverse sea life, we saw sealions, sea turtles, and countless types of birds and small fish.
our most impressive fish was a tuna that Tom reeled in, it was a beast probably around 125 lbs, and took him almost an hour to get in the boat. a few times we wondered who the victor was going to be, but Tom bested that pollo!


Marlin are Jims favorite fish, and we fished for them off and on for a week. had a few chances but never got one hooked. 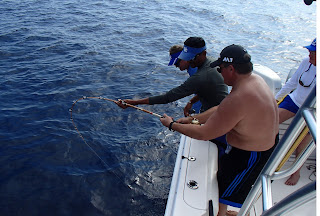 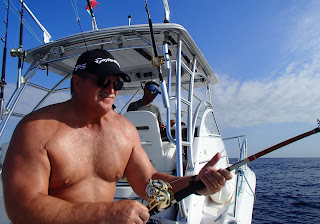 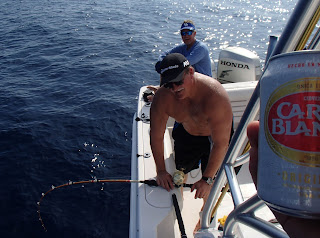 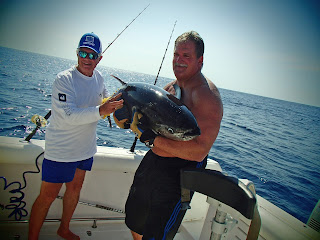 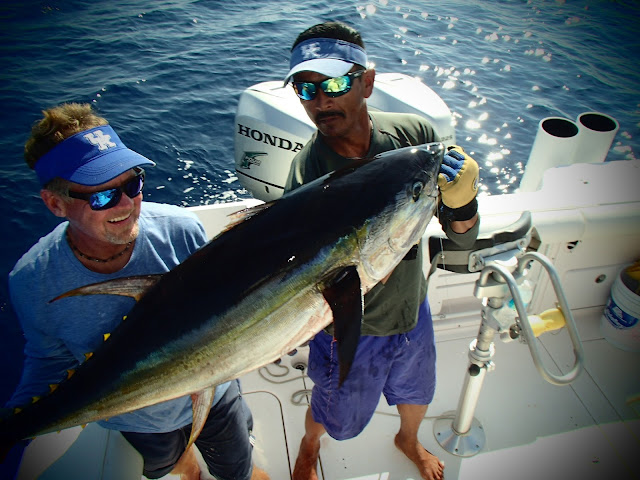 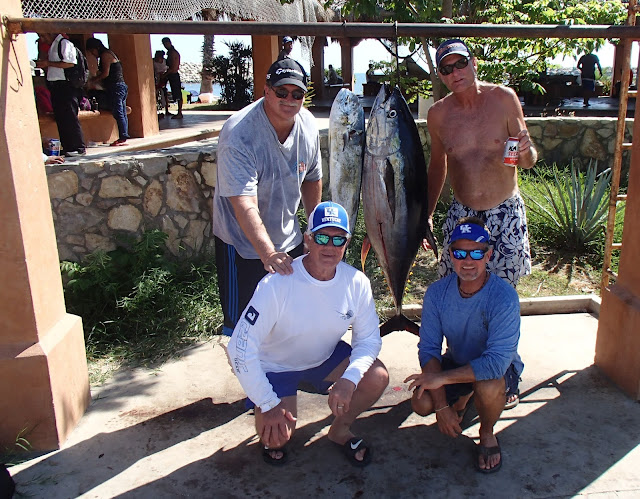 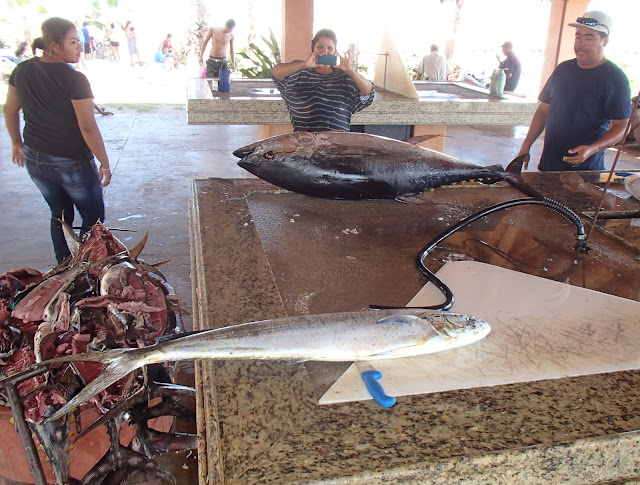 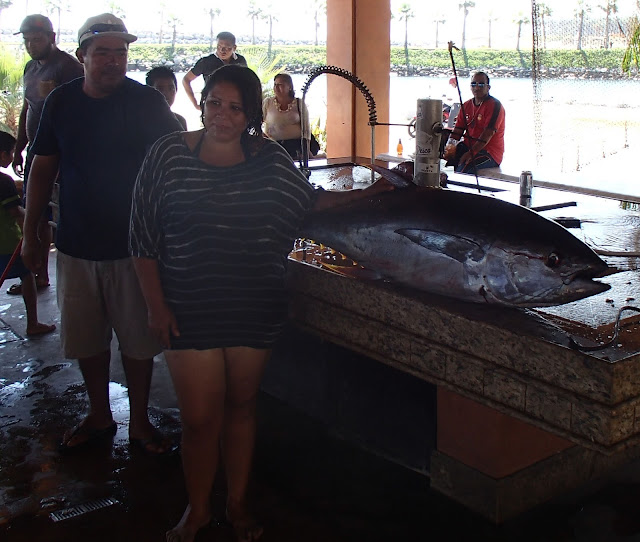 one of my favorite days jim and Debbie and myself took off in the truck and headed into the
mountains, yes i said mountains baja, belive it or not is very mountainous, with peaks rising to over 6000 feet. Add this to the lack of roads and you get a pretty isolated and pristine area. 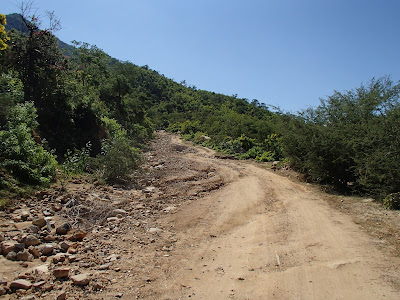 using my favorite tool google earth i found a road that went to a budhist retreat and theoretically all the way through the mountains. What i hadnt taken into considerations was the recent tropical storm and the devestaion it caused to the roads. For sure we were happy to have Jims big Montana truck!
On the plus side, the rain had left the mountains lush and green with running water where there is probably not any usually. 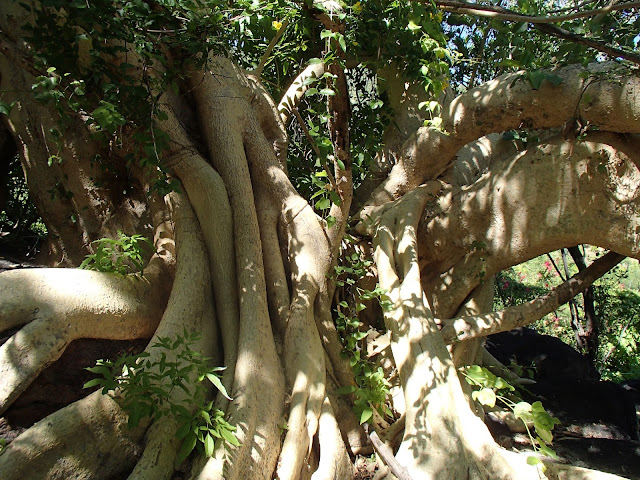 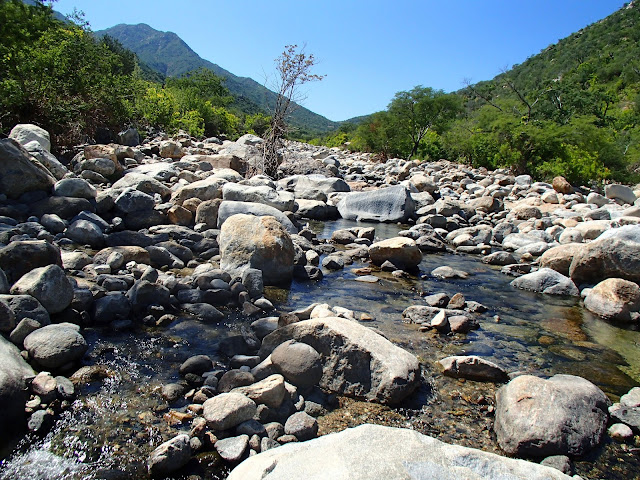 ok so im going back Dec tenth for round 2 word is hot wahoo and striped marlin bite!
stay tuned! 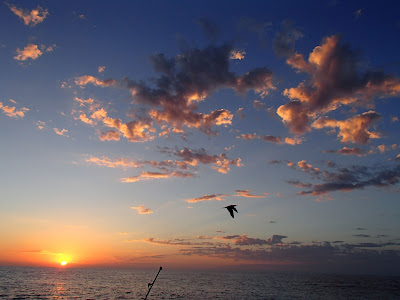 Posted by Clay Mitchell at 8:55 AM No comments:

I've been hitting my favorite river pretty hard lately. I think the fish may know my car and the definitely know the flys i tie. I had lots of fish come up just to take a look but, most refused to eat it.

I tried nymphing in my favorite holes, the "between the rocks hole, the "ponderosa hole", and the "uppercamp hole", and only caught a few small trout and a monsterous whitey.

So one would think that it was a bad day fishing right?...... 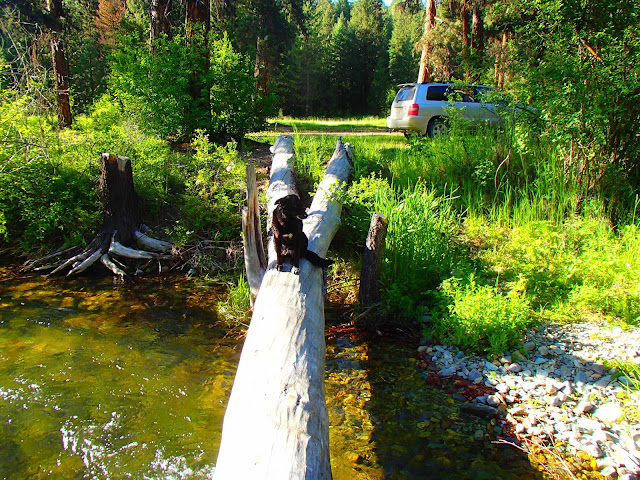 it was a great day to fish because I had my favorite fishing companion to go with. After almost 3 months Maggie is back so of course she wanted to go fishing....  how could one refuse those eyes?
A day fishing with Maggie is always a joy and certainly isn't fishing alone!

Posted by Clay Mitchell at 9:34 PM No comments:

You Don't Know Unless You Go 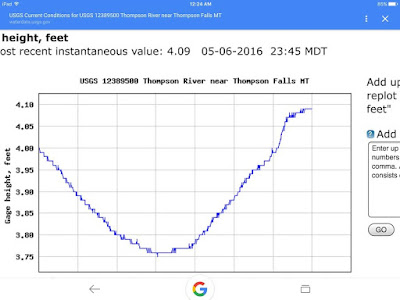 my friend Brendan and I were planning to go and check out the salmon fly hatch, and both being junkies we look at the USGS river flow site like 20 times a day. and on the morning in question the hydrograph was going up fast!

would it be muddy?
think the bugs will still be out?
fish don't eat well on the rise do they?
should we still go?

but the last one was the most important one: "you don't know until you go"
and true words were never spoken.
look at the pics and judge for yourself.

Posted by Clay Mitchell at 8:05 AM No comments:

Fishing with Jaegs. (or Ed as he is known in the fly fishing circles)


Jaegs had recently lost his father, Art, who along with being a kick-ass engineer was also an avid fly fisherman.  Jaegs showed up with some vintage fly reels and an old school fly rod.


Little did we know the old pfluger would get a workout this day. We needed to choose an all-day float, but had to keep in mind my dad was doing our shuttle, so that means no dirt roads, as he doesn't believe it's possible to drive on them (maybe i will tell you about our day on the Thompson river some time). So we chose to float from Blankenship bridge to House of Mystery. Blankenship is cool because it's here where the North Fork and Middle Fork come together to form the main Flathead. cool yes. Good fishing? Not so much.......... And as my fishing partner Jim likes to say "boy this sure is a pretty float........" Which is another way of saying "boy, the fishing sure sucks". 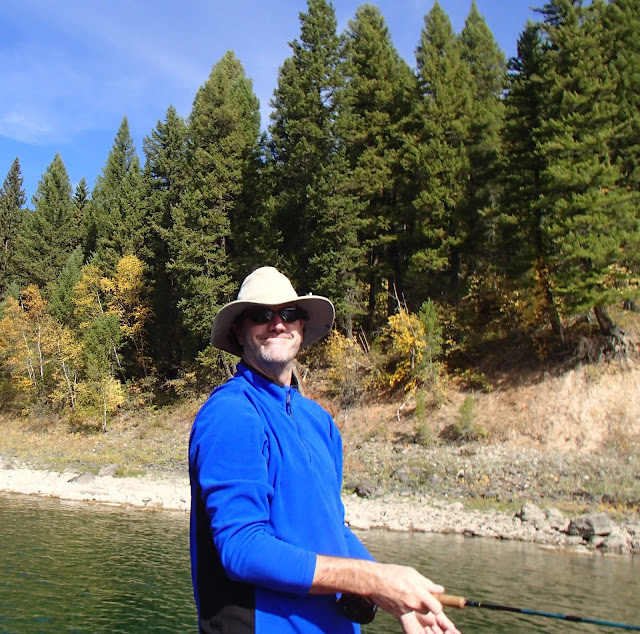 Off we go. Jaegs casting Arts rod, with pink hoppery looking fly that I think I procured in St. Regis at the grocery store, I'm on the sticks. We float thru some good-looking water, even pull over and both cast. Results nothing. Oh well, it's still Early. No bugs to be seen, no fish doing anything.


We continue down stream, I see a likely looking spot, where I pull over and instruct Jaegs to cast out into the "bumpy" water. After quite a few cast Jaegs says "here you try". Countless casts later I finally get a fish to come up, right out in the middle.


Set! Jump! Jump! Jump! I say " hey it's a rainbow" not huge, maybe 11 inches. Jaegs says, "nice" ( I think he was beginning to think that there weren't any fish in this river)

Posted by Clay Mitchell at 11:55 PM No comments:

I'm sure by now anyone who has perused these rantings knows i have an obsession with the Thompson River. And yes I don't deny it. but the Thompson was once the location of a sad event.

The Thompson river valley was once the home of "Americas most remote brewery" Who knows why Brew master John Campbell built the Lang Creek Brewery so far out in the boonies. My own theory was that he knew i was a sucker for a good brew, and a sucker for a fishing hole (sorry JD).


My favorite beer in the world at one time was the Lang tri-motor amber ale, and while my beer tastes have gravitated towards IPAs recently im sure a frosty tri-motor would still hit the spot. I do remember Lang brewed a beer called "hop zeppelin" and at the time i thought it to be way too hopped up but today............................... im not so sure if i wouldn't love it. All of Langs beers had an aviation ring to them, i think maybe John was a pilot or something. 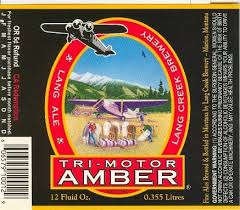 There were many a day when going to or from fishing we would stop in at Lang and have a "sample"
or three. John sold the brewery a time or two but i guess the people he sold it to didnt have his passion for beer or his know-how so he always got it back, then one day i heard the bad news, lang was done. the end of an era. The end of tri-motor. So i did what anyone would do...... went to costco and bought three cases of tri-motor. We also stopped by the brewery in the days before it closed, and i scored a Land Creek fleece, which i have to this day.

the only sad thing was it was the last lang tri-motor quite possibly in the world.

made me happy and sad at the same time.

farethee well Lang Creek Brewery  you have been missed. 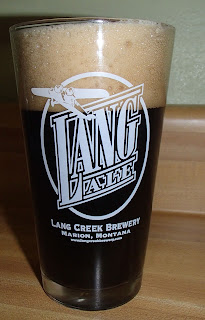